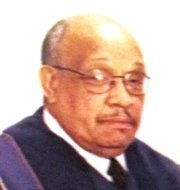 Please share a memory of Rev. Dr. Revell to include in a keepsake book for family and friends.
View Tribute Book
Dr. Revell E. Hicks departed this life peacefully on April 8, 2011 at Roanoke Memorial Hospital in Roanoke, VA. He was preceded in death by son Harvey, parents Raymond and Dorothy, sister Louise and brothers Jerry, Raymond, and Leon. He leaves to cherish his memories, a loving and devoted wife, Dr. Barbara Hewitt-Hicks, six children,Revell Jr. (Bonita), Elder Felicia Haley, Lorilei Hicks, Dennis (Kareyn), Jeffrey all of Texas, Chief Minister Ma'asehyahu (Sharown) of Powhatan, VA.; nine grandchildren; 10 great-grand children; brothers, Jackie (Josie) of Philippines, Stanley of Powhatan; a sister Roslyn Hicks of Richmond, VA.; three aunts, Thelma Branch, Edna Brown and Bertha Gray (Alfred); brother-in -law, Clinton Hewitt (Mary) of Minnesota and sister-in-law Channie Johnson (William) of New Jersey and a host of nieces, nephews and devoted friends, among them being Deacon Stephen Gafford (Grendolyn), Rev. Chester Jordan (Sarah), Minister Lisa Harris and Joyce Lee- Cartier. Dr. Hicks spent his childhood growing up in Powhatan County. There he received his formal education in the Powhatan School System. His spiritual growth began at Mt. Zion Baptist Church were he was baptized at an early age. Upon completing high school, he entered the United States Air Force where he spent four years traveling the world, settling in Fort Worth Texas, studying inhalation therapy at St. Joseph Hospital. He met and married Julia Murrell to this union six children were born. Upon completion of his studies, he transferred to St. Mary's Hospital in Richmond. He continued his education and received his certification from the Commonwealth of Virginia as a Respiratory Care Practitioner and Cardiovascular Technologist. Dr. Hicks' work enhanced that department to a fifty-two person medical unit. Retiring after 27 years of service to St. Mary's. Education being his passion, Dr. Hicks furthered his education at Wake Forrest University in North Carolina. Dr. Hicks met his beloved wife, Barbara and was further blessed by the birth of their son Ma'asehayahu (Israel). Dr. Hicks had many accomplishments, both personally and academically, but he experienced what he would explain as the zenith of his joy, when he answered the call to ministry. He began his ministry at Mt. Zion Baptist Church as a Deacon. Continuing his call, he pastored the Pleasant Grove Baptist Church in Powhatan for eight years. In June of 2003, Dr. and Mrs. Hicks moved to Appomattox, VA where he pastored Galilee Baptist Church. After five and a half years, Dr. Hicks retired as pastor but not as a servant of God. He joined New Jerusalem Baptist Church as an Associate Minister and functioned in various duties under the leadership of Dr. Calvin L. Gray. Dr. Hicks previous affiliations included the James River Baptist Association, and Baptist Ministers Conference of Goochland and vicinity, Appomattox Ministerial Association and Hasadiah Baptist Association of Lynchburg. Dr. Hicks has always been a lover of family and friends. Meeting him as a stranger always ended in a new friendship. Knowing who he was, a child of God, made Dr. Hicks an obedient servant and worker for the Lord. His light so shined it made you want to know more about the God he served.
To plant a beautiful memorial tree in memory of Rev. Dr. Revell Hicks, please visit our Tree Store