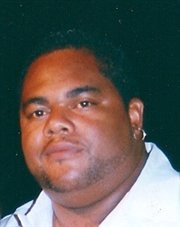 Please share a memory of Rondi to include in a keepsake book for family and friends.
View Tribute Book
Rondi &quot;Boom/Big Dog&quot; Alanzo Jefferson, born to Lawrence and Ruth Jefferson on November 12,1965 in Richmond, Virginia. He was converted, baptized and joined Little Zion Baptist Church in 1977 under the leadership of Rev. G.W. Manning where his membership remained. He attended Powhatan County Public Schools. He was joined in marriage to Angela Bland on March 25, 1994. Rondi was self employed since 1996 for R. Jefferson and Sons Hauling, where he had a very dedicated employee/driver Dean Watson of Louisa, Virginia and his son, Travis. His first car a 1970 Chevelle, where he was given the nickname &quot;Boom&quot; for his passion for loud music. The love of racing was in his heart when he turned the Chevelle into a street racing car. His hobby was buying cars and fixing them up to race. He also had two 1967 Novas that he raced at various tracks such as, VA Motor Sports, Budds Creek, Richmond International and Colonial Beach. Not only did he have a love for cars but his dump trucks as well. This is when he received the nickname, &quot;Big Dog&quot;. Yes, he could cook and enjoyed doing it whenever he got the chance. He enjoyed traveling to various places such as Florida, Maryland, Las Vegas, Bahamas, etc. with family and friends. He loved to joke and make people laugh. He had a love for ALL people whether he knew you or not. But by the end of the conversation you had an everlasting friendship and nothing but love for him and he had the same for you in return because his heart was so Kind, Loving and Giving. He always had a smile on his face no matter the circumstance or situation. The word &quot;No&quot; was never in his vocabulary, he would just say, &quot;I'll get back with you&quot;, knowing all the time he was going to do whatever needed to be done. He was a God fearing and loving family man. On Sunday, February 27, 2011, Rondi departed this life at Little Zion Baptist Church while fulfilling his duty as an Usher. He was preceded in death by his great-grandmother, Vadie Young. He leaves to cherish his memories to: his wife, Angela; two sons, Travis (Shant) and Rondell Jefferson; two daughters, Marquetta Terry and Rongela Jefferson; one grandson, Trevor Jefferson; his parents, Lawrence and Ruth Jefferson; two sisters, Zorena Nlewem (Dr. Chimezie), Teashayl &quot;Mook&quot; Lee (Rev. Arthur); one brother, Markie Berry (Madeline); parents-in-law, Bennie and Naomi Wade; one sister-in-law, Sophia Henderson-Bland; one brother-in-law, John Robert Bland, Jr.; one goddaughter, Angela Kenney; nine aunts, Vernell Turner, Ella Turner, Ollie Turner, Hazel Williamson, Shirley Jennings, Gertrude Purrington, Lucille William (Ernest), Loraine Boyer, and Ruth Jefferson; three uncles, John Turner (Diane), Tyrone Turner, and Willie Jefferson; numerous great uncles and great aunts, nieces, nephews, cousins; two devoted, Michael Turner and Thomas Payne, Jr., along with a host of friends, four devoted, John Robinson, Jimmy Boatwright, Jimmy Morris and Richard Clark, Jr.
To plant a beautiful memorial tree in memory of Rondi Jefferson, please visit our Tree Store

A Memorial Tree was planted for Rondi
We are deeply sorry for your loss ~ the staff at Marian Gray Thomas Funeral Home
Join in honoring their life - plant a memorial tree
Services for Rondi Jefferson
There are no events scheduled. You can still show your support by planting a tree in memory of Rondi Jefferson.
Plant a tree in memory of Rondi
Print
Online Memory & Photo Sharing Event
Online Event
About this Event