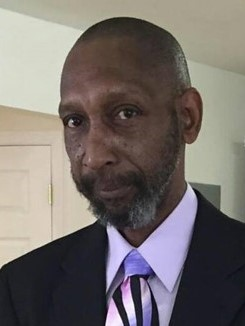 Please share a memory of Horace to include in a keepsake book for family and friends.
View Tribute Book
Beloved, if God so loved us, we ought also to love one another. ~ I John 4:11 Horace was born March 24, 1960, in Paineville, Virginia to Rev. Horace & Lillian Trent Montague. In Sept. 1969, Horace confessed his belief in Christ and was baptized by his father and became a member of Union Baptist Church, which is now named Union OutReach Fellowship Church in Cumberland County, VA. In his youth, he served there as a choir member. In June 2005, he became a member of the Reed Rock Baptist Church in Amelia, VA, where he was a loyal member and musician. Horace loved gospel music and rendered his service to many through music and song. He was a member and guitarist of 'The Montague Family Singers" for 50 years. For 18 years, he served as musician for Monroe Baptist Church Choir in Prince Edward County. He was also one of the organizers, members and singers of an a cappella group formed in his VA National Guard Unit called "The Soldiers For Christ". Horace attended Russell Grove and Amelia County Public Schools where he was a member and participant in 4-H conferences, DECA, marching band, basketball, track and field and he was a 1978 high school graduate. After high school graduation, Horace diligently worked in many capacities. His first job was at Woodbridge State School in Roway, New Jersey. After his return to Virginia, he worked at Miller Manufacturing and General Book Binding Co. in Amelia. He joined the VA Army National Guard where he served for over 20 years. He was employed by the VA Dept. of Corrections for 16 years in the positions of officer, perk team leader, defensive tactic and firearm instructor and other positions as well. He also worked for Freedom Ford Car Dealership, Boggs Municipal Service, Wingo Construction Co., Jones Construction Co., Farmville Insulation Co., Carr Construction Co., Hicks General Construction Co., Nottoway Construction Co. and Scott's Pallet Co. God is good. Through the many misfortunes, struggles, atrocities, and health issues that Horace endured, he never gave up. He kept pressing on with a positive attitude. This was a true display of his belief and faith that everything would be alright. He loved his family and he considered friends and acquaintances as his extended family. He knew everybody and everybody knew him. He never met a stranger. He had a lively spirit and enjoyed being the center of attention with his joke telling. Laughter kept him motivated and inspired him to motivate others. He was well known and looked up to by many people. He had a musical gift that he shared through singing and playing guitar. His favorite gospel song was "It's Gonna Be Alright." He was a trash talking Dallas Cowboys fan that always spoke favorable of the team even when they lost. He enjoyed fishing and spending time with family and friends. He will truly be missed. Our beloved Horace Murray Montague, Sr., known to some as "Que", quietly answered God's call to eternal rest on June 14, 2022. He leaves to cherish his legacy: a devoted wife of 39 years, Patricia S. Montague; three sons, Darrell Ford of Newport News, VA, Horace Montague, Jr. (LaToya) of Richmond, VA and Donte' Montague (Yolanda) of Staunton, VA; one grandson, Karvell Ford of Richmond, VA; two great-grandchildren, Omari and Kali Ford of Richmond, VA; three sisters, Nannie Wilson of Chesterfield, VA, Joyce Nyhaug (David) of Chesapeake, VA and Frances Eugena Montague of Amelia, VA; two aunts, Iola Bartee and Evangelist Pauline Trent both of Cumberland, VA; three nephews, Cory Wilson (Erica) of Chesterfield, VA, Joshua Nyhaug (Rina) of San Diego, California and Justin Nyhaug (Tiffany) of Chesapeake, VA; one brother-in-law, Howard Smith of Farmville, VA; four sisters-in-law, Rev. Bernice Smith of Farmville, VA, Alfreda Hicks (Eugene) of Rice, VA, Phyllis Tillerson (Rev. Thomas Tillerson) of Prospect, VA, Juanita Adams (Melvin) of Richmond, VA; and a host of other family and friends. "QUE" Have you heard the story of "Que?" It is one of the greatest ever told. He was a man that didn't know a stranger And he had a heart of gold. He was the life of the party. His goal was to make everyone laugh. Think of your favorite memory, There is no reason to be sad. If you know him like I do, Que lived everyday like it was his last, In the church, at a cookout, anywhere. He never let the opportunity pass. He was a husband, great-grandfather, grandfather, and father, a son, uncle, nephew, brother, cousin, and friend. He would talk so much about his family, You would think the conversation would never end. Some describe him as a giant. His presence was a large symbol of love. Now his is in heaven and still the life of the party, telling jokes, making the angels laugh and smiling over us from up above. ~Donte Montague I wish I could see you one more time Come walking through the door. But I know that is impossible, I will hear your voice no more. I know you can feel my tears, And you don't want me to cry. Yet my heart is broken, Because you had to die. I pray that God will give me strength, And somehow get me through As I struggle with this heartache, That came when I lost you. ~Lovingly submitted by the family
To send flowers to the family or plant a tree in memory of Horace Montague, Sr., please visit Tribute Store
Wednesday
22
June

Share Your Memory of
Horace
Upload Your Memory View All Memories
Be the first to upload a memory!
Share A Memory
Send Flowers
Plant a Tree