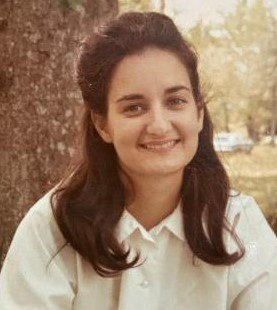 Please share a memory of Sheila to include in a keepsake book for family and friends.
View Tribute Book
Sheila Dunn, 1946-2022 Sheila Dorothy (Vella) Dunn, 75, of Cumberland, Virginia died peacefully at home on April 21, 2022 after a prolonged illness. She is survived by her husband of 55 years, Dan Dunn, her children Tina (Chris) Rust, Nathan (Rachel) Dunn, and Aaron Dunn; her grandchildren, Annabeth Rust, David, Dunn and Holly Dunn; half-sister Marian Falkensteine; a beloved aunt, several cousins, sisters-in-law, nieces and nephews. She was preceded in death by her parents, Vista Ruth (Hulvey) Vella and Charles Vella. Sheila grew up in the Vienna, Virginia community, a suburb of Washington, D.C. where her father was a construction contractor, and her mother was a legal secretary. She met the love of her life, Dan, at 15 years old. Dan played saxophone in the marching band, and she was a majorette at James Madison High School in Vienna. She also played on several sports teams, while Dan was interested in mechanics and music. Their relationship remained strong through high school, college (for her) and trade school (for him). They married in 1967, while Dan went to Vietnam with the Navy as a "Sea Bee", Sheila worked on base. After Dan returned from service, they returned to northern Virginia, their family and friends and began their married life where they went on to tackle "life" in their own way. They established a family, homes, and a small business. Always, they worked together. Throughout their life's journey, they always liked each other, took every opportunity to sit close, always said, "I love you" and held hands whenever possible. Sheila was a kind and generous person who was loved by all who knew her. She always looked for the good in people and any situation. She was devoted to her family and spent her life striving for their happiness. She will be greatly missed. While everyone surviving her grieves for her, we are comforted by the thought of her as healed and whole in Heaven in the company of all those family and friends who preceded her. We will see her again someday. There will be a celebration of life gathering at a later date.
To plant a beautiful memorial tree in memory of Sheila Dunn, please visit our Tree Store

Look inside to read what others have shared
Family and friends are coming together online to create a special keepsake. Every memory left on the online obituary will be automatically included in this book.
View Tribute Book
Services for Sheila Dunn
There are no events scheduled. You can still show your support by planting a tree in memory of Sheila Dunn.
Plant a tree in memory of Sheila

Share Your Memory of
Sheila
Upload Your Memory View All Memories
Be the first to upload a memory!
Share A Memory
Plant a Tree