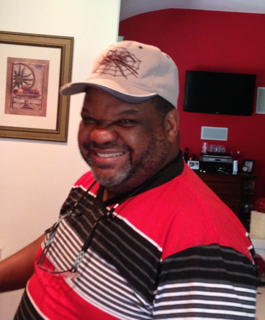 Please share a memory of John to include in a keepsake book for family and friends.
View Tribute Book
John Robert Brown affectionately known as "Robbie" was born in Montclair, NJ, on December 15, 1956, to Estelle Brown and Robert Gordon. Robbie at a very early age came to Cumberland, to reside with his, great-aunt and great-uncle Senata and John Hatcher. He attended Mt. Olive Baptist Church where he was later baptized. Robbie attended Cumberland County High School and graduated with the class of ('75). In 1978, he married Ruth Brooks, and from this union their daughter Rukiyah was born. Over the years, he worked for various jobs; Brown's Store, Done Right Enterprise, Levi's Foods, Del-Med, and his last place of employment was with Medical Delivery Services (MDS). Robbie enjoyed riding his motorcycle with a group of guys who called themselves "Guys Love to Ride". He also enjoyed attending NASCAR races, farming, and tending to his cows. Robbie loved to talk and was a big jokester. He always made you laugh and was guaranteed to put a smile on your face. Robbie loved being with his family, most of all his daughter Rukiyah better known to him as "Bumper" and spending time bonding with his grand babies. Robbie was predeceased by his parents; Estelle and Robert; brother, and sister-in-Law; James and Bernice Brown; great aunt and great uncle; Senata and John, three sisters; Saundra Lovett, Rosemary Campbell (Samuel) and Angelina Potrilla. Robbie leaves to cherish his fond memories, a daughter Rukiyah (George), three granddaughters, Makayla, Kamirah, Jazzmyn, one grandson George, IV., one sister, Roberta Morton (Peter), a host of nieces, nephews, family, friends, along with devoted co-workers and buddies, Charlie McKann, Bruce Robinson, and George Langhorne.
To send flowers to the family or plant a tree in memory of John Brown, please visit Tribute Store
Friday
11
February

Share Your Memory of
John
Upload Your Memory View All Memories
Be the first to upload a memory!
Share A Memory
Send Flowers
Plant a Tree