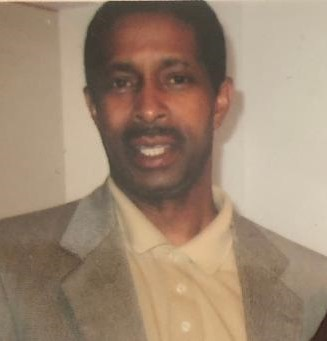 Please share a memory of Cleveland to include in a keepsake book for family and friends.
View Tribute Book
Cleveland Johnson Jr "Junie," sixty-one, was born on December 7, 1960, in Richmond, Virginia to Cleveland Johnson Sr and Annie Mae Hampton Johnson. Cleveland accepted Christ at an early age and joined New Hope Baptist Church in Cartersville, Virginia. Cleveland was a star athlete in high school and as a fellow classmate stated, "He was our Barry Sanders in football, Steph Curry in basketball without a three-point line and Derek Jeter at shortstop with a cannon for an arm." After high school he attended Livingstone College in Salisbury, North Carolina where he majored in English. After college he moved to New Jersey to live with his sister Barbara. During his time in New Jersey, he worked at Newark Liberty International Airport. He then returned home to Virginia where he worked for the University of Richmond as a groundskeeper. His most recent position was a cook at Sunrise Senior Living. He was truly a jack of all trades. Cleveland loved fishing, landscaping, cooking, and spending time with his family and friends. He loved fishing with his brothers, daughters, and great nephew Jaydon. He had a true green thumb and prepared the best pasta dishes. He always had a joke to tell and a smile on his face. Cleveland was a loving father, brother, uncle, and friend that will be missed by all. He passed away peacefully on January 29, 2022. In addition to his parents, he was preceded in death by his grandmother Ellen Scott Hampton, grandfather Wort Hampton, nephew Darnell Johnson and great nephew Jaydon Pompey. He is survived by two daughters Alexus Johnson of Baltimore, MD and Natalya Johnson of Richmond, VA; four sisters, Cally Davis (Nigel) of Charlotte, NC, Barbara Crump (Spencer) of Teaneck, NJ, Ann Brown (Raymond) of Powhatan, VA, and Ellen Haley of Cartersville, VA; two brothers Teddy Johnson of Richmond, VA, and Robin Johnson (Helen) of Cartersville, VA; Aunt Mary Liggon of Long Island, NY, a vast number of nieces, nephews, cousins, other loving relatives, and dear friends. If Roses Grow in Heaven If roses grow in Heaven Lord Please pick a bunch for me. Place them in my Father's arms And tell him they're from me. Tell him that I love and miss him And when he turns to smile, Place and kiss upon his cheek, And hold him for a while. Because remembering him is easy, I do it every day. But there is an ache within my heart That will never go away. Love Lexie and Neele
To send flowers to the family or plant a tree in memory of Cleveland Johnson, Jr., please visit Tribute Store
Thursday
10
February

Share Your Memory of
Cleveland
Upload Your Memory View All Memories
Be the first to upload a memory!
Share A Memory
Send Flowers
Plant a Tree