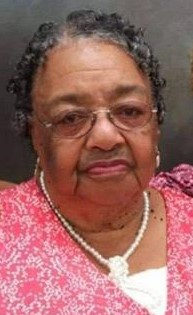 Please share a memory of Catherine to include in a keepsake book for family and friends.
View Tribute Book
Catherine Elizabeth Taylor Woodson, affectionately known as Peachie, was born on August 5, 1935, to Cornelius B. Taylor, Sr., and Lilly B. Staten Taylor. She was the youngest of seven children. Peachie was reared in a home of love with a deep compassion for family. She was preceded in death by her parents; daughter Hester Priscilla Woodson; brother Cornelius Taylor, Jr.; four sisters Ethel Taylor, Rebecca Woodson, Geraldine Carter, and Jeanetta Booker; grandson Demetric Woodson; two great grand-daughters, Michaela Woodson and Tyauna Woodson; and great-nephew, Jimmy Dibble. At an early age she gave her life to Christ and joined Petersville Baptist Church in New Canton, VA where her membership remained. Peachie attended Luther P. Jackson school in Cumberland, VA. In November 1955 she married Arthur Woodson, Sr. and later moved to Yonkers, NY. There were five children born through this union. In 1968 she moved back to Cumberland, VA where she resided until God called her home. Peachie's work history included various factory jobs in New York, seasonal employment at Virginia State Forestry, and caregiving for the sick and elderly in their home and hers. She was training to be a nurse at the Central Virginia Health Center in the 1970's until her parents became ill and she took the time to care for them. Peachie would also babysit her grandchildren and great nieces and nephews in the summer while her children and nieces worked. Post working years, she spent her days doing word search puzzles and watching TV (especially her beloved New York Yankees). She was a lover of homestyle country food and desserts and enjoyed cooking as well as eating. She also enjoyed mail ordering from catalogs like Fingerhut and going to Images by Tanya for hair shampooing and styling. She looked forward to and loved family gatherings. On Sundays you would find her basking in love with her family and friends. Peachie leaves to cherish her memories one brother John Taylor, Sr. (Yonkers, NY); four children Ethel Woodson (Cumberland, VA), Catherine Woodson (Chesterfield, VA), Melissa Woodson (Farmville, VA) and Arthur Woodson, Jr. (Carmenlita) (Pamplin, VA); and six grandchildren, Breanne Woodson (Darrell Trent), Jerrine Lee, Eric Lee, Janine Lee, Rodriguez Woodson and Domonta Woodson; one granddaughter-in-law, Crystal Woodson. She was affectionately loved as GiGi by her great-grandchildren, Daeyln Harper, Christian Woodson, Daryn Woodson-Trent, London Lee-McFadden, Paris Woodson, Josiah Lee, Bren Woodson-Trent, and Saige Woodson. On Wednesday, September 29, 2021, Peachie was called home from her labor to her heavenly reward when she lost her battle with cancer. She leaves a host of nieces, nephews, cousins, and friends including bonus son's Harrison Jackson and Jerry Lee and life-long friends Alease Johnson and Rev. Annie Anderson. The family extends a special thank you for the love and support of a few of her nieces, Phyllis Taylor, Linda Taylor, Jessie Woodson-Johnson, Geraldine Henderson, Cathy Deniece White, Tanya Alahbakshs and Terrada Johnson; and nephew Calvin Carter. We extend a very special thank you to the angels that God sent to be her caregivers, Sarita Bolden, Tammy Bolden, and Lucille Harris. Peachie was loved by many and her 86 years here on earth was not long enough. We thank God for our bonus memories and for blessing us with her loving presence. We take comfort and peace in her favorite motto "God will make a way somehow." She will forever be loved and missed. Rest in peace and fly high!
To send flowers to the family or plant a tree in memory of Catherine Woodson, please visit Tribute Store
Friday
8
October

Share Your Memory of
Catherine
Upload Your Memory View All Memories
Be the first to upload a memory!
Share A Memory
Send Flowers
Plant a Tree