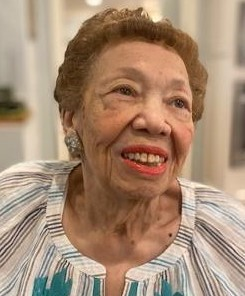 Please share a memory of Barbara to include in a keepsake book for family and friends.
View Tribute Book
Barbara Reese Trent De Pass Barbara Reese Trent De Pass was born in Farmville, VA, Prince Edward County, on June 19th, 1936, to the parents of George Trent and Mary Fannie Jackson Trent. She departed this life on Monday September 13, 2021. Her spiritual journey began at the First Baptist Church in Farmville, VA, when she gave her life to the Lord at the approximate age of twelve. During her childhood years, she was an active member of the Church Sunday School, serving as a nursery schoolteacher, an usher, and a member of the Children's Choir. Barbara attended the County's segregated elementary school and the Robert R. Moton High School. On April 23,1951, she was a participant in the student body that staged a walk-out protesting intolerable classroom and maintenance conditions at Robert R. Moton High School. This courageous decision by her and her student body, contributed to the U. S. Supreme Court's 1954 school desegregation decree, affecting all segregated school systems throughout the United States. This class, with her photo, appears at the African American Museum on the mall in Washington, DC. Hers was the last graduating class before public schools for Black people in Prince Edward County were closed. With financial support from her parents, she enrolled at Virginia State University (VSU) and majored in Business Administration where she received her B.A. Degree in 1958. While a student at VSU, she was a member of the Future Business Leaders of America, Delta Sigma Theta Sorority, Trojan Yearbook Staff, College Usher Board, Modern Sound Club, and Big Sister Organization. Her congenial personality facilitated her establishing close relationships with several friends with whom she maintained close contact with for several decades thereafter. Upon graduation from college, she migrated to New York City to live with her sister, Marie, and became employed as an Administrative Assistant at a Nursing Facility in Harlem. She later moved to Gary, Indiana, to live with her brother, Leroy, where she worked in Chicago as an Administrative Assistant until November,1958, when she moved back to New York City and worked as an Administrative Assistant to the family physician. In December,1959, she moved to Washington, DC, after marrying her college sweetheart Rudolph, on December 26,1959. In 1960, Barbara accompanied her husband to Pennsylvania State University to attend graduate school. In 1961, they returned to Washington, DC, where she worked as a clerk at the then Civil Service Commission until 1965, when her passion to reach out to under-privileged children led her to enrolled full-time at Howard University, to pursue a MSW degree in Social Work. Upon receiving her MSW degree in June of 1967, she became employed by the District of Columbia's Child Welfare Department as a Social Worker. In 1971, she left the labor market to have and care for her two sons, Michael, and Curtis, becoming a stay-at-home parent and mother until 1986. During her years as a stay-at-home mom, she relished a sense of fulfillment in pouring of herself into her sons and observing the fruit from the labor of love that she and Rudy poured into them. From 1975-1978, she accompanied her husband to Liberia, Africa, for a 3-year assignment with the World Bank. In 1986, upon feeling assured that her two sons, by the grace of God, had reached the age of maturity, she returned to the labor market as a Social Worker with the Family & Child Services of DC, where she worked until she retired in 1990. Barbara embraced an important family value of worshipping as a family which was manifested during their 26-year membership at Shiloh Baptist Church, and their 3-year membership at Mt. Sinai Baptist church, both in Washington, DC. In 1992, she and her husband joined their youngest son, Curtis, then a student at the University of Maryland, at the Hope Christian Church in College Park, MD. At Hope Christian Church, she enrolled in several classes which accelerated her spiritual growth and equipped her to assume an assignment as a small-group leader, responsible for the care and spiritual oversight of approximately thirteen women. In 2015, she was ordained a Deacon, and in 2016, she was asked to oversee a group of Senior women, known as Women of Virtue. Later, she accepted an assignment as Coach over a small group of female adults called LifeNet. Throughout her adult Christian career, she received her greatest fulfillment during the time she spent in Praise and Worship, as a prelude to hearing God's word preached. She loved to bask in His presence! Since 2014, she reduced her active participation in church-related activities due to encroaching health challenges. Barbara had a passionate desire to see her children & grandchildren develop and maintain a growing personal relationship with Jesus Christ as their Lord & Savior. Oftentimes, when faced with academic and work-place challenges, they would call to solicit her fervent prayer, wisdom, and direction, concerning the challenges of their encounters. When they were in her presence, she never failed to inquire of them as to their walk with the Lord, especially querying, "Did you pray about it?" She was a faithful financial contributor to appeals related to providing food, clothing, and medical care for the underprivileged and the spreading of the gospel of Jesus Christ into the uttermost parts of the world. Recipients of her generational transfer of Christ-like love, warmth, intimacy, and compassion are her husband and best friend, Rudolph, two sons, Michael, and Curtis, two daughters-in-law, Thembi and Rebekah, a nephew, George Booker and wife Ellen, a sister-in-law, Jannette Trent; six grandchildren, John, Aaron, Christa, Seth, Jonathan, Grace, and Jorah; brother-in-law, Gene L. DePass, and several nieces and nephews by whom she was fondly received, loved, and respected. Barbara was pre-deceased by her two parents, sister Marie, and brother Leroy. She harbored a profound love for her church family and friends and was always grateful to them for the reciprocal love and respect that they often communicated for her.
To plant a beautiful memorial tree in memory of Barbara DePass, please visit our Tree Store

Look inside to read what others have shared
Family and friends are coming together online to create a special keepsake. Every memory left on the online obituary will be automatically included in this book.
View Tribute Book
Services for Barbara DePass
There are no events scheduled. You can still show your support by planting a tree in memory of Barbara DePass.
Plant a tree in memory of Barbara

Share Your Memory of
Barbara
Upload Your Memory View All Memories
Be the first to upload a memory!
Share A Memory
Plant a Tree