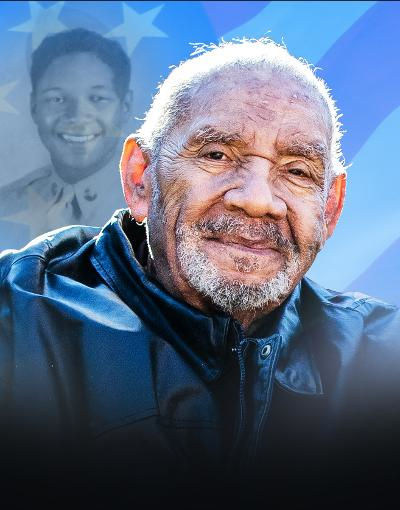 Please share a memory of Robert to include in a keepsake book for family and friends.
View Tribute Book
Robert Arthur Miller returned to his heavenly father on January 13, 2021. Robert fondly known as, Bobby was born on December 10, 1931 in South Haven, Michigan to Donald and Maureen (Holland) Miller. Bobby grew up in Grand Rapids, Michigan until he left to join the Air Force in 1947. Bobby traveled the world throughout his career, all the while taking his family with him. After retiring from the military, he brought his family back to Virginia where he worked for General Electric until he retired in 1985. Soon thereafter he started his own business, Miller Janitorial where he provided employment for many of his family. He finally retired for the third and final time in 1997, where he enjoyed spending time with his wife of 68 years and his grandchildren. Bobby was a devoted member of New Hope Baptist Church where he served many years as the Chairman of the Trustee Board. He was a talented musician as he played piano for his family gospel group called the Cousin's Gospel Singers. Bobby was known to take care of everyone and loved nothing more than having his whole family around him. He was everyone's Granddaddy. He always wanted to make sure everyone had enough to eat which explained his pension for a continuous overstocked freezer. Bobby was preceded in death by his parents, Donald and Maureen Miller, his sister, Jean Ruth Blackwell, his niece Mona Johnson, and one grandson, Joshua Smith. He leaves to mourn his loss, his wife, Susie Miller; 4 daughters, Rinda Robinson (James), Salonge Crenshaw (Lylton), Pamela Staton (Nathaniel), and Carla Barksdale (Frank); 9 grandchildren, Lalita (Mack), James Jr., Eddie (Tomeisha), Mike, Nathaniel, Andy (Norma), Shermia (Sylvester), Mondrell (Ashley), John and Brian (Alexis); 18 great-grandchildren; a devoted nephew, Michael Embree; and other family members and friends.
To send flowers to the family or plant a tree in memory of Robert Miller, please visit Tribute Store
Saturday
23
January