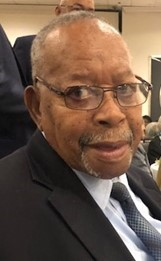 Please share a memory of King to include in a keepsake book for family and friends.
View Tribute Book
King Moses Gray was born on November 12, 1928 in Powhatan, Virginia to Hester Queen Pittman and Morris Bird Gray. He departed this life for a new home with his Lord and Savior at his home on October 21, 2020. At an early age he accepted Christ and was baptized at Little Zion Baptist Church. He attended Sunday school and church regularly. He attended school in Powhatan County and graduated from Pocahontas High School as the class valedictorian which allowed him to obtain a state scholarship to Virginia State College (now Virginia State University). He graduated in 1952 with a BS degree in Industrial Education. While at Virginia State College he completed the ROTC program and was commissioned as a Second Lieutenant in the Army of the United States. He received orders to report for military duty on November 30, 1952. He completed the officers' training program at Fort Monmouth, New Jersey and St. Louis Obispo, California. During the Korean War he served in South Korea as company Commander for Company B 101 Signal Battalion. On November 3,1954 he discharged from the army. In January 1955, he continued his education by enrolling in Howard University. He graduated in 1958 with a BS degree in Electrical Engineering. While at Howard he was offered employment at North American Aviation Company in Los Angeles, CA. He worked at several companies in the Aerospace Industry and retired as a Quality Assurance supervisor at Hughes Aircraft Company in November 1989. During his stay in Los Angeles, he completed several courses in engineering at UCLA and enrolled in courses in real estate. He obtained a California Real Estate Sales license for part time work as a Real Estate salesman. In December 1989, he sold his condo in Los Angeles and moved to his new home in Henderson, Nevada. His greatest event while living in Henderson was hosting the 1999 Gray Family Reunion in Las Vegas. During the spring of 2000, King gave up the big cities and bright lights and moved back to Powhatan, VA and built his new home on the family property. He was a member of the Shining Light Masonic Lodge A.F. & F.M., Alpha Phi Alpha Fraternity and American Legion. King never stopped his search to learn. During his retirement he enrolled in cooking classes, especially Asian cuisine and studied guitar. His hobbies were photography, hunting, computer games, walking and bike riding. While in Las Vegas, he loved socializing in casinos, jazz clubs and greatly enjoyed "all you can eat" buffets, especially if they were free. He was preceded in death by: his parents; his wife, Jean Evelyn; brothers, Everette, Clarence Lee, Alfred and Arthur and sisters-in-law, Burnell and Bertha. King leaves to cherish his memory: a devoted friend, Delores White; nephews; Theo Gray (April), Patrick Gray (Denise), Everette Gray (Sandra), Carlton Gray (Shelly), Alfred Gray, Aubrey Gray (Troy), Larry Gray, Ricky Gray (Kisha) and Earl Gray; nieces, Joyce Johnson, Jacqueline Jefferson (Bobby), Zola Jones (Alfred), Angela Leonard (Kevin), Stephanie Gray Carter (Darnell) and Karen Fountain (Marcel); a host of great nephews and nieces, cousins and friends, one devoted, Jessie Harmon. Leave of Duty I do believe You're now on leave, Which will be long, So, sing a song. You were a soldier, So be bolder, You gave your best. And lived life with zest. You were brave and true, In what you do, And showed one and all, Your higher call. Be strong and sure In God secure, For by his beams, You reached your dreams. It is our prayer, You always cared, And when life's done, You will have won. We also pray, There comes the day, When all are free For eternity. There we will meet, We'll take our seat, And forever rest at our Savior's feet.
To send flowers to the family or plant a tree in memory of King Gray, please visit Tribute Store
Sunday
25
October

Share Your Memory of
King
Upload Your Memory View All Memories
Be the first to upload a memory!
Share A Memory
Send Flowers
Plant a Tree