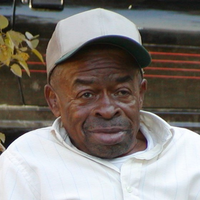 Robert Elliot Booker, affectionately known as "Bobby", was born May 6, 1934 in Long Island, New York to Irving Sr. and Catherine Smith Booker. Bobby moved back to Gloucester County, Virginia with his grandparents at an early age. Bobby attended Cumberland Training School. At an early age he was baptized and join Union Zion Baptist Church in Gloucester, VA and later moved his membership to Reed Rock Baptist Church Amelia, VA. Bobby worked as a construction worker and various jobs throughout his life until he retired. Bobby was always with his nephew, Hazell, and they were like two peas in a pod. He loved going to church and spending time with his family and anytime you asked him anything it was always "Well". Bobby didn't have a favorite food he just liked food, but he loved his beer. He was always willing to lend a helping hand to anyone who needed help. He was preceded in death by his parents and one, brother Irving, Jr. Bobby leaves to cherish his memories: two sisters, Beulah Trent and Katherine Booker; a host of nieces, nephews, great-nieces and nephews, great-great nieces and great-great nephews, cousins and friends. "Well" The pain of death has passed. My labor and sorrow cease. And life's long warfare closed at last, My soul has found it's peace