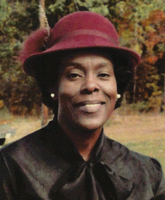 Deaconess, Elsie Bolden Trent was born to James and Charlotte Bolden on November 18,1933 in Cumberland County, Virginia. She was the seventh of thirteen children. Elsie accepted Christ at an early age and was baptized at Zion Baptist Church. She was a member of Bethlehem Baptist Church, where she served as a choir member, the head of the food committee, deaconess and Mother of the Church. She was a graduate from the former Luther P. Jackson High School in Cumberland County, VA. Elsie was married to Deacon James Trent in 1966. She was the mother to six beautiful children, Alvin (Garfield), Andrew, Sr. (Butch), Annie Mae, Thelma (Elaine), Mark and Coretta. She was employed as a housekeeper and caterer, as cooking was her gift. During her employment, she was given the opportunity to travel all over the East Coast, creating delicious meals for many notable figures, to include the Baber and Stonall families of Cumberland County, VA, Chuck Robb, the former Governor of Virginia and multiple judges, lawyers and other officials. In addition to cooking, Elsie loved completing crossword puzzles and sewing in her spare time, often making quilts for her family when they were younger. She also loved to ride out to Farmville and go shopping, as well as eat chicken sandwiches at Buffalo Wild Wings, McDonalds' apple pies and fish fillet sandwiches and her beloved honey buns. On Saturday, December 11, 2021, Elsie entered eternal rest in her home, surrounded by her family. She was preceded in death by: her husband, James; her son, Garfield; her parents, James and Charlotte, and a number of siblings. She is survived by: her children, Andrew Booker, Sr. (Butch), Annie Mae Smith, Thelma Brown (Elaine), Mark Trent (Sheila) and Coretta Booker; nineteen grandchildren; twenty-five great-grandchildren; five greatgreat-grandchildren; three sisters, Edmonia Carter, Thelma Jones (James) and Mabel Gregory (Joseph); two brothers, Thomas Bolden (Cecilia) and Jefferson Bolden (Elsie); four sisters-in-law, Mary Trent, Lillian Bolden, Dorothy Kirby and Shirley Smith; and a host of nieces, nephews and close friends, to include, Elsie Langhorne and Tyrone Winfield. "Mother & Grandmother's Wonderful Legacy There Is A Wonderful Legacy Of Which We Wish To, Tell About A Wonderful Woman That We Love So Well Her Strength Lives Within Us And Grows Stronger Each Day Her Honor Lingers Though She Has Slipped Away We Miss The Sound, Of Her Laughter In Her Style Lectures Too! We Miss Hearing Her Say I Love You She Fought A Good Battle Then Gave Up The, Fight To Rest In, The Arms Of Jesus What A Beautiful Sight In Our Hearts Her Memory Will Always Stay Nothing Could Ever Take Her Remembrance Away. Love You! Children & Grandchildren