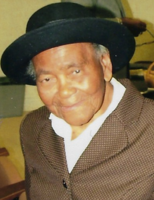 Corine Jones Washington transitioned home to be with the Lord on December 21, 2020 at Heritage Hall Nursing Facility in Dillwyn, Va. She was born on October 15, 1922 to her loving parents, Thomas and Susie Jones of New Canton, Va. She was preceded in death by her loving husband Jack John Washington of New Canton, Va. and her son, Earnest L. Washington (Ellen) of Madison, Va. She also was preceded in death by her brothers, John William (Elizabeth), Eddie, and Thomas "Junious" (Lucy) Jones. She was saved at an early age under the leadership of Pastor Elder Heard of Highway Mission Holiness Church. Evangelist Corine Washington was the last original member of Highway Mission Holiness Church. In January 2001, she joined Holy Trinity Church of God in Christ under the leadership of Pastor Josephine Jackson/Bishop designate Clyde D. Brown. She was not only an evangelist but was also known for her beautiful singing voice and was a member of the gospel singing group: Stars of Faith. Her favorite song she loved singing was, "Precious Lord, Take My Hand. Corine Washington was well known throughout the community for her delicious meals, generosity (she would give her last dime if needed), love of family, and let's not forget her feistiness. She grew up in an era when cooks didn't use measurements, cups or spoons. She worked in private homes to provide and care for her family. Corine was known for her spirit, grace, affection for others, funny stories and of course her love and commitment to Christ. She is survived by her daughter, Mary Anderson and daughter in law, Marie Washington; five grandchildren, Sterenzo Washington (Annie), Van-De Washington, Sophia Banks, Melissa Sandridge (Bobby), and Avril Washington; eight great grandchildren, Antoine Washington, Landus Banks, Austin Sandridge, Alyssia Sandridge, Calden Muscat, Jordan Washington, Breyanna Washington, and Madllyn McCormick; three great-great grandchildren, Amari Washington, A'leece Washington, and Landen Banks; a host of nieces, nephews, family and friends.