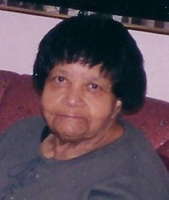 Thelma Inez Branch, 96 of Richmond, Virginia entered eternal peace on December 23, 2019. Thelma was born in Trenholm, Virginia on May 23, 1923, daughter of the late Joseph Morris and Louise Robinson Morris. Thelma accepted Jesus Christ as her Lord and Savior at an early age and was a member of Mt. Zion Baptist Church and attended until her health failed. In 1940, she married the love of her life, Andrew Henry Branch and then they moved to New York. from this union, four children were born. Thelma worked for over 40 years for the Brooklyn Jewish Temple and for the Schwartz family. Following their retirement, they returned to Virginia. In her life, some of her favorite things to do were; games of chance, cooking, socializing and daily phone conversations with family and friends. Her favorite TV shows were; "Judge Judy" and "Wheel of Fortune", and she never missed an episode! Thelma was preceded in death by her devoted husband, Andrew "Andy" Branch, twin sons, Ronald and Donald and her two devoted sisters, Dorothy Hicks and Edna Brown. She leaves to cherish fond memories, two sons; Sterling A. Branch (Hazel) of Brooklyn, NY and Perry D. Branch (Valerie) of Richmond, Virginia; nine grandchildren and seven great-grandchildren, three sisters-in-law; Marion Miller, Margie Keyes and Tessie Bates; numerous nieces, nephews, cousins and friends, two family friends; Ruth Holman and Barbara Jackson. She had a special bond with Florine Bell, Estelle Hicks, Wilnett Scott, Kelley Hicks and Stanley Hicks. The family would like to express their gratitude and appreciation.