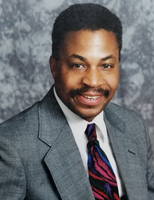 Ralph Vincent Peaks, the son of Ralph Peaks, and the late Gloria Poinsette-Peaks, was born in Brooklyn, NY on June 16th, 1960. He was baptized at Baptist Union Baptist Church in Dillwyn, Virginia. At an early age, he attended Rosemary Kennedy Institute. Later, he was enrolled in the Try Rehabilitation Institute in Garden City, NY for individuals with mental disabilities. He was an outstanding participant of the programs offered by the Institute. Ralph was a loving son, stepson, stepbrother, nephew, and cousin. He was a gentle soul and loved by everyone. He enjoyed listening to music of various genres. He had a love for his favorite candy, Starburst, which came in second to his pastime of riding his bicycle. He also had a passion for action movies. He was preceded in death by his grandparents Willie and Arlene Poinsette; Arthur and Senobia Peaks; two uncles, Willie and Godfrey Poinsette; other uncles, aunts, relatives and friends. On Wednesday, November 27, 2019, at the Nassau University Medical Center in East Meadow, NY, Ralph departed this life. He will forever be remembered by his father and stepmother, Ralph and Audrey Peaks; half-brother, Christian Peaks; stepbrothers, Texroy and Radcliffe Jones; stepsister, Bridgette Mills; uncles, Harold (Alice) Peaks and Theodore Poinsette; aunts, Bernice Peaks, Arlene Grant and Barbara Poinsette; cousins, Clarence Taylor, Phyllis Taylor, Linda Taylor, LaVerne Allen and Theresa Jones; and a host of other relative, too many to mention.